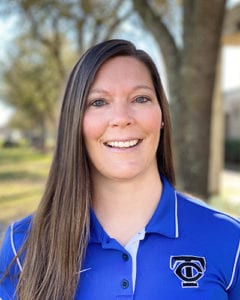 Playing against the toughest competition in Northeast and Central Florida (and Camden County, Georgia), the Conquerors compiled an 8-7 record in 2020, including winning streaks of three and four matches. They earned the top seed in Class 3A-District 2 but fell in the district tournament opener to perennial powerhouse and region finalist Episcopal in five very close sets.

Head Coach Crystal Dow recapped the unusual 2020 season. “We had the foundation of an amazing team built,” said Coach Dow, “but, unfortunately, COVID caused the season to be shortened by several weeks. Matches were cancelled and seeding for playoffs was determined by a blind draw. We made some good memories and love our seniors from last year, but we are ready to put 2020 behind us and pray that this season isn’t negatively impacted again by COVID.” 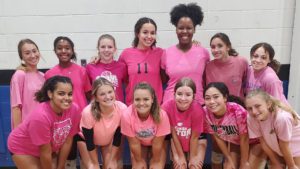 Seniors Ally Carter, Layla Brooks, and Sheridan Beck will lead a blend of experienced and upcoming varsity players, all of whom have competed in championship level volleyball for TCA and several other organizations.

Carter led last year’s Conquerors with 43 service aces and 181 digs. In three years as a varsity Conqueror, Carter has amassed 151 aces, 508 kills, and 687 digs. Brooks sharpened her already dominant skills with JJVA this past summer, and Coach Dow calls her “a force to be reckoned with.” Both could sign college volleyball scholarships during the school year.

Beck contributes in many ways on and off the court: leadership, encouragement, hustle, and great ball control.

Freshmen Amaria King and Ariel Ross already have two years of varsity volleyball experience, and they will continue to shine as they progress through their high-school careers.

King had 200 kills in a shortened season a year ago.

Ross, a setter, had 356 assists as an eighth grader, and she will draw Division 1 attention very soon if not already.
Seniors Karissa Aman, Mya King, and Allie Tamares offer valuable experience and depth necessary for a winning team to go deep into the playoffs.

The Conquerors always play a rigorous schedule, and that is by design. Playing the toughest competition will prepare the ladies for the grueling opposition they will face in the postseason. Trinity, again members of 3A, District 2, will play several higher-class teams, and those within the district are mighty once again in 2021.

7A Creekside, Flagler Palm Coast, and Bartram Trail; 5A Clay; 3A PK Yonge; and 2A Christ’s Church Academy are among the toughest non-district opponents Trinity will face. “They will all be really tough matches,” said Coach Dow, “but we are up for the challenge.”
Trinity will also play Nease, St. Johns Country Day, Hilliard, University Christian, and Harvest Community in non-district play.

“Providence and Episcopal are some of the best teams in Jacksonville and happen to both be in our district,” said Coach Dow. “The road to the playoffs goes through both of those teams for us. We took Episcopal to five sets at districts last year and are hoping to have the edge over them this year. Because of COVID, we only got to play Providence in a weekend tournament, where they barely edged us out 22-25, 24-26.”

The Conquerors travel to Providence on September 13 and Episcopal on September 28. Bishop Snyder will host Trinity on October 12.

Biggest Rivals of the Season

The two district opponents – Providence and Episcopal – are always TCA’s biggest rivals. “It’s always so close with both of them, and this year we plan to come out on top!” said Coach Dow. “CCA has grown into a pretty big rivalry game for us as well. The big rivalry games are always the most fun.”

Christ’s Church Academy is a powerful 2A team, and all three programs – in addition to Trinity -- are capable of reaching the state playoffs almost every year.

Biggest Challenge Preparing for the Season

Every season brings its challenges, and 2021 is no exception, especially with the uptick in COVID. Teamwise, the Conquerors are ready to play; the challenges come from external factors. “We had to shut down practices for one week so far,” Coach Dow proclaimed. “Hopefully that will be it. It has also been difficult to get our uniforms and other volleyball gear in a timely manner due to factory shutdowns all around the world.”

“We have a 13-player roster this year, which is bigger than most years. Obviously, only six players take the court at a time, and we usually have eight total starters. I can truly say that all 13 of them deserve those starting spots, regardless of who gets to be in the starting lineup.

The talent runs deep this year. The team will need to allow this competition to drive them to work harder and not prevent them from celebrating each other’s victories and the victories of the team. Christine Caine said, ‘To build a strong team, you must see someone else’s strength as a complement to your weakness, not a threat to your position or authority.’”

The regular season begins on Tuesday, September 24, when the Conquerors visit the Panthers of Nease High School. The first home game is against Flagler Palm Coast on Thursday, August 26.